On Monday 3rd June, at the very beginning of the school day right after the half-term, Dr. Kress from the global Henkel company came to give an illuminating talk on the subject of his career and work experiences to around 35 students in Year 12.

Dr. Rahmyn Kress has been Chief Digital Officer at Henkel AG & Co. KGaA since March 2017. Dr. Kress served as Chief Executive Officer and President at Digiplug S.A.S. Dr. Kress joined Digiplug in January 2011. Prior to his new role at Henkel, he has been with Accenture since 2010, where he held several executive roles from being the Chief Executive Officer & President of an Accenture digital subsidiary in digital supply chain, Managing Director of Telecom, Media & Technology. He served as Managing Director of Accenture Technology Ecosystems & Ventures in Europe. He has more than 25 years of professional experience in developing and implementing digital strategies. He gained extensive international expertise across different industries. He served as Senior Vice President of Physical and Digital Supply Chain for the world’s largest music major, Universal Music Group.

He was friendly, engaging and approachable. Students were fascinated by hearing how he and his Iraqi family adapted to life in Germany. His problems with dyslexia and ADHD ensured that although he found school difficult initially, he certainly developed the ability to become determined and resilient which allowed him to seek success. He is keen to mentor young people who are interested in entrepreneurial ideas and problem-solving! The talk was followed by a substantial Q and A session.

Naturally we discussed politics but Dr. Kress prefers to think positively. He lives with his family in London. 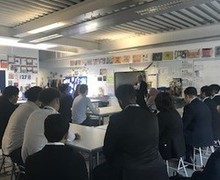