On Friday 4th May Year 12 students met Derek Wyatt, who has had a long and distinguished career in the field of sport, television, computing. politics and the Royal Society of Arts. He played Rugby for England, went to Oxford after some years as a History teacher, developed sports programmes for Sky TV, and was a Labour MP for 15 years.He currently runs the Royal Trinity Hospice among many other pursuits and responsibilities, and despite his current studies in International Relations he found time to speak at length to our sixth formers about the history of the internet.

Students were fascinated by historical details such as Churchill's dilemma over the bombing of Coventry in World War 2 and his decision to not reveal that his team had cracked the code. Derek described how he was also involved with the Design Council which meant that he befriended Sir Tim Berners Lee ( inventor of the World Wide Web) but also the young man Jonny Ive who was discovered by Steve Jobs and designed the apple mac, the iphone and the ipad.

Year 12s asked excellent questions and Derek's natural bonhomie and enthusiasm ensured that students were gripped by his knowledge and wealth of professional experiences. Many indeed were amazed at the value of Apple shares and that Derek had perhaps sold them too early! 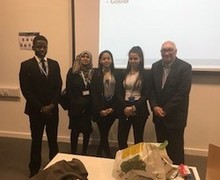 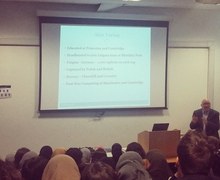 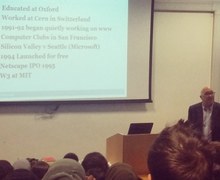 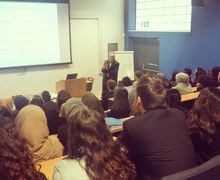