Our wonderful pupils spoke to the @ChildrensComm this morning about what it was like moving from lockdown mentality to live in person teaching - inspiring to hear - watch these updates & follow the commissioner for more commentary https://t.co/ludb9RK3MA

Are your children safe online? https://t.co/PCZm4p2mhl

Free world class classical music for all under 26 year olds. Just round the round from us https://t.co/T6vMGsVHYX

Senior students were allowed to apply for these roles and in the first instance needed to submit an application form. There was then an interview process, after which five students were taken through to the next stages.

The students had a week of canvassing, followed by elections where all candidates had to present in assemblies to all students and staff. There was then a vote where students put an X next to their chosen representatives and put their vote in a ballot box. At the end of the week all student and staff votes were counted.

Harris St. John's Wood are pleased and proud to announce that the following students were voted into post:

Please congratulate them when you seem them. 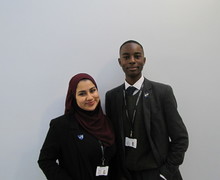